A.T.N.T. proves to be too big for the Smoking Eagles 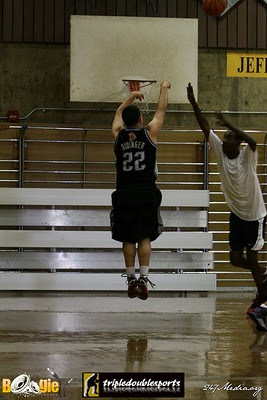 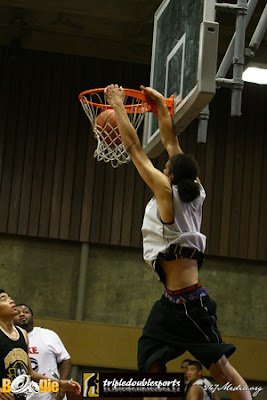 On paper, this should be an easy victory for A.T.N.T. and that is exactly what occurred. Unfortunately, for the Eagles, they could not match up to the size of AT. AT took full advantage of the size difference by beating up SE on the boards. Three players had 8 or more rebounds led by C-Duke (15pts, 15rebs). SE’s Juan Bidinger tried his best to keep his team in the game by scoring half of the team’s total points (25pts). After a competitive first-half, AT pulled away in the second outscoring SE 45-26. SE lack any inside presence, relying on the long-ball with a 12-for-28, 43% shooting performance as a team. AT shot 31-for-80 as a squad, but their low shooting percentage (39%) was made up for by all their offensive rebounding and second-chance points. The Eagles look to get back into the win column next week versus SFPD, while A.T.N.T. look to continue their winning ways versus an undefeated Prodigies team.
Posted by Triple Double Sports: at 11:57 AM No comments:

Laggers turn up "D" to hold off Phil Good

Another exciting contest brought the Laggers, led by C-Glyndelle Poole, versus Phil Good, who are led by Randy Tagle. Under-sized, the Phil Good squad turned in a great effort. Tagle took over the game from the jump and continued his mastery for the entire first half by scoring 20 of his game high 24 points. Despite the big first-half by Tagle, Phil Good only led by one point at the half 31-30 because of the stellar shooting of Jayson Moore. Moore scored 12 of his team high 14 points in the first-half doing his part to keep the Laggers in the game. In the second-half of the game, PG’s Joerdan DeGuzman, picked up where fellow teammate, Tagle left off. DeGuzman scored all 17 of his points after the half which allowed PG to take a 49-46 into the final period. That is when the Laggers unleashed their three-headed monster of Poole, Nick St.John and Ervin Osotto. Each took turns, making basket after basket, turning their 3rd period deficit into a 66-64 victory! Poole, St.John and Osotto (9 points each) also turned up the defense by combining for six second-half steals.
Posted by Triple Double Sports: at 11:31 AM No comments: 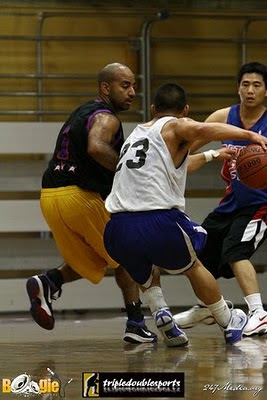 Pepsi versus Coke. A debate that’s been going on for years! Who is better? What will satisfy your thirst? Well, this battle between the veteran Prodigies squad and the upstart Bay Area Ballers team further adds to the debate. The Ballers jumped out to a quick lead on sheer adrenaline alone, but that did not deter the Prodigies from battling back and showing the youngsters how a “team” plays the game by overcoming adversity together. The game featured a fast-paced high scoring first period which had the Prodigies ahead 24-16, a lead that they would not relinquish. Ryan Tana (15 pts, 11 rebs) kept the Ballers in the game throughout with his first double-double of the season. Also, nice performances were given by the duo of Tim Wang (14 pts) and Jake Moore (15 pts). The Prodigies, behind a big game from Ryan Susauto (23pts, 4rebs), extended their halftime lead to eight by the end of the 3rd and coasted to the finish posting a 67-60 victory. A shout-out goes to Taraz Lee, who almost put together the first triple-double in tripledoublesports history. Lee’s (7pts, 6rebs, 8asts) all around game proved to be the difference for the Prodigies. So, in the eternal question of Pepsi versus Coke… (the answer for now is) although the Pepsi generation is making strides…Coke is it!,
Posted by Triple Double Sports: at 11:25 AM No comments: 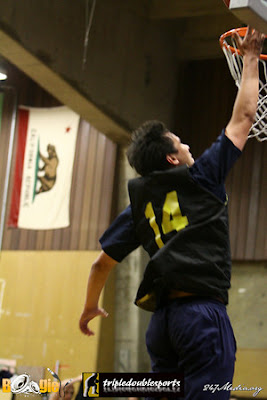 Wow! Is one was to describe this battle. Each team came into the game a couple of players short, but that did not stop the action. Back and forth the lead went. Nick Wong came out strong for DLS with a 9 point 1st quarter giving his team a 16-14 edge. A combination of TEJ’s Jerrelle Wilson (14pts, 7rebs) and foul trouble for DLS allowed TEJ to take a 33-31 lead into the half. The 3rd quarter continued a rollercoaster of a game with the lead changing hands seemingly with every possession. Neither team could pull away from the other. Lawrence Melton and Nathaniel Thomas each had strong second halves to maintain the TEJ advantage. To nobody’s surprise this contest went to the wire! Mike Hicks (19pts, 5rebs) of DLS could not be stopped! In foul trouble for most of the game, Hicks and some calm free-throw shooting by his teammates forced and extra session. The score going into overtime was knotted at 62-62. Hicks scored the first bucket in the extra frame, but that was all for DLS. With the turnovers by DLS and missed free-throws by TEJ, it seemed as if neither team wanted to win the game, but ultimately it was the clutch shots by the Thompson boys (Nathaniel and Rashad) that allowed TEJ to walk away with the W.
Posted by Triple Double Sports: at 11:12 AM No comments: