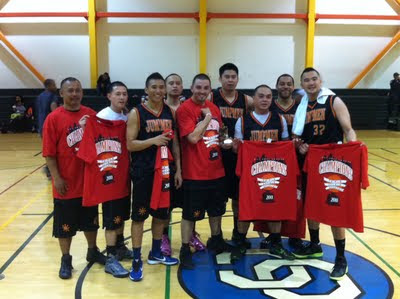 Jumpmen: 58
Eagles.SF: 43
We had a PACKED house for the 6'2 and under division CHAMPIONSHIP! We had supporters out there with banners, blow horns and multiple cameras from both teams! I think i know which teams I need to bring to ORACLE to play! hint hint!
This was a great matchup and both teams did not let me down. They fought until the end, but JUMPMEN's deep roster proved to be victories. Jumpmen attacked from all angles. The scoring was evenly spread out due to the leadership of point guard RG. His play was big in this FINALS matchup because he had so many options on the offensive end to choose from and it took his leadership to please everyone. The aggressiveness that Jumpmen showed on the defensive end, (especially the work they did on the boards) made the Eagles.SF's day a long one. Sunny's 15 first half points kept the Eagles.SF in the game, only down 3 points at the half. However, they went cold in the 2nd half, only scoring 16 points to the Jumpmen's 28 points.
JUMPMEN Leaders:
Eric (FINALS MVP): 14pts, 6rebs
Francis: 10pts, 4rebs
RG: 9pts, 5rebs, 4assts
Eagles.SF Leaders:
Sunny: 19pts, 7rebs, blk, stl
James: 7pts, 2stls
Nat & Jordan: 6pts
Posted by Triple Double Sports: at 10:38 AM No comments:

UNITED NATIONS takes their Destiny in the OPEN FINALS 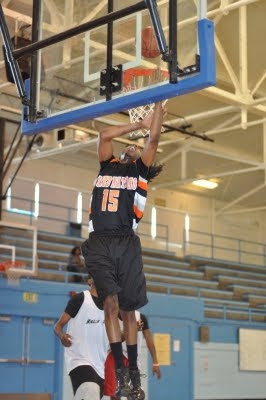 United Nations: 86
Destiny: 64
The overall #1 ranked United Nations took on the surprising #14 ranked Destiny in the Triple Double Sports CHAMPIONSHIP.
Led by Clint's 19 points in the 1st quarter, Destiny was able to keep pace with the high scoring United Nations. BUT, as the game went on, the talented and deep roster of the United Nations proved to be too much for the veteran Destiny team. When all else failed for the U.N., they dumped the ball into the finals MVP big Will, where he was either fouled or took care of business.
United Nations leaders:
Will: 22pts, 8rebs, 2 stls
Kena (KP): 17pts, 6rebs, 3assts
Rubin: 16pts, 6rebs, 2assts
Destiny leaders:
Clint: 26pts, 5rebs, 3stls
Ant: 18pts, 4rebs
Posted by Triple Double Sports: at 10:15 AM No comments: