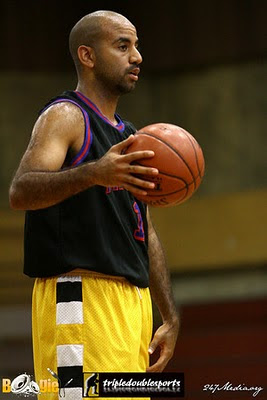 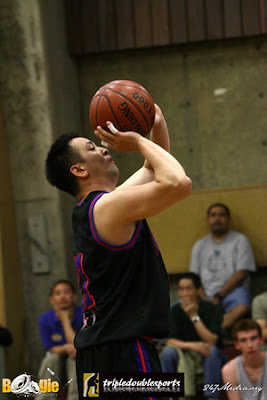 Magic Johnson, Jason Kidd and Oscar Robertson are 3 names synonymous with the triple-double (double digits in three different statistical categories). That group was one point away from adding another member. The Prodigies' Taraz Lee nearly messed around and got a triple-double, by grabbing 10 rebounds, dishing out 11 assists and scoring 9 points - almost posting the first triple-double in tripledoublesports history -to lead his team to a 70-53 triumph. Not to be outdone was team captain, Torrent Lee. Torrent came out with guns ablaze scoring a season-high 19 points, 12 in the first quarter. His 12 first quarter points were more impressive given the fact that the Prodigies began the game with only four (4) players! The Phil Good team was led by point guard, James Aragon. Aragon scored a team high 12 points. Team Phil Good needs a full squad to show up to their games in order to make some noise in the post-season! Prodigies remain the #1 seed going into the final week of the season.
Posted by Triple Double Sports: at 1:33 PM No comments: 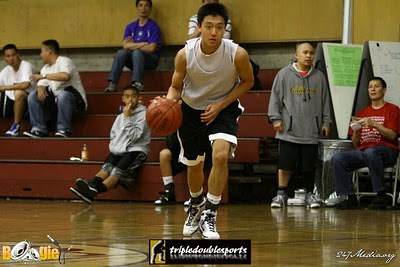 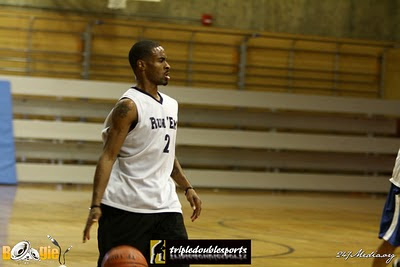 This was the game of the night. The veteran Run 'n' Gun team was matched up against the upstart Bay Area Baller team. I am sure the Ballers didn't see a team like RnG in the WCAL, but they put their best foot forward and didn't back down from the #3 seed. Ryan Tana was held in check for most of the game only scoring 7 points. The Ballers were kept in the game by Anthony Silvestri (16pts, 4 rebs) and an all-star effort by team captain Tim Wang (22pts, 9rebs). Wang played like a man posessed continually taking the ball to the rack versus a collectively strong defense, but unfortunately it wasn't enough. Led by Jacob Hill's 15 points, 6rebs and 4stls, the RnG squad pulled away in the second half, turning a tight game into an 86-65 romp.
Posted by Triple Double Sports: at 1:09 PM No comments:

A.T.N.T. run all over the Laggers 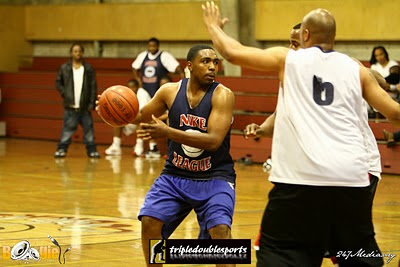 In a day filled with blowout victories, A.T.N.T. did not disappoint by dismantling the Laggers, 76-56. Garrett led the Laggers with 14 points, but without much help, the Laggers didn't stand a chance versus the tenacious A.T.N.T. troop. Following the opening tip the A.T.N.T. team fell into their trademark full-court press defense and without a true point guard on the Laggers, it proved to be overwhelming! Captain Warner came out on fire from long distance. Warner scored a team high 18 points, 4-for-8 from 3-pt territory. Tigg also chipped in with 18 points with an array of highlight worthy drives to the hoop. Looks like the A.T.N.T.'s defense may be what they need to take them all the way to the top!
Posted by Triple Double Sports: at 12:42 PM No comments:

With just five players, the SFPD was undermanned and overmatched as they squared up versus #2 seeded Dreamleague Select team. Led by Ross Nakamura and Nick Wong (22pts and 16pts respectively) the D-Select team completed a wire to wire job, winning 81-38. The SFPD's Az Castro scored 17 of his team's 38 points. The lack of substitutions led to the demise of the SFPD. Bottom line is that they just ran out of gas and the D-Select team took advantage of the 5-man squad by running and running and running until they formed a lead that even the LA Lakers couldn't overcome. Keith Murphy of the SFPD promised that their entire team will come out in full force for the final couple of games and into the playoffs! Don not count the SFPD out. In our single elimination playoff bracket system...it is still anybody's to win!
Posted by Triple Double Sports: at 11:20 AM No comments:

(x) - Not eligible for post-season

Posted by Triple Double Sports: at 1:38 AM No comments: 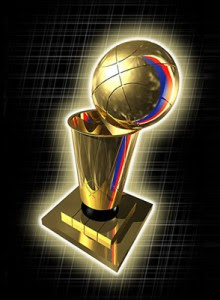 The post-season will begin on 8/8/2010. It will be an 8-team single elimination bracket form. The #1 seed (based on regular season standings) will play the #8 seed, the #2 seed will play vs. #7 seed, etc. Tie breakers will be based on the team's point differential.
Posted by Triple Double Sports: at 12:52 AM No comments: